Roll over image to zoom in
Click to open expanded view

Pineapple is a tropical fruit available in any grocery store and a staple in many homes around the world.

Christopher Columbus brought pineapples back to Europe after an expedition to South America. Pineapples became known as an extravagant and exotic fruit, served only at the most lavish of banquets.

However, pineapples are now common, and people are able to enjoy them in solid, dried, and juice forms.

In Central and South America, pineapple is not only valued for its sweet taste, it has been used for centuries to treat digestion problems and inflammation. 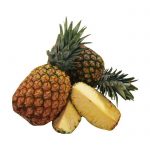 Add to Cart
WhatsApp us